The Ninth Letter is a humanities magazine focusing on literature and the arts. Bound as a collaborative effort between the Graduate Creative Writing program and School of Art and Design, emerging and known authors feature collections of poetry, nonfiction, and fiction writing while graphic designers offer an interpretation of the writing through original design production. Jodee Stanley was critical to the conception of the Ninth Letter and became its initial editor.

Inspiration for the magazine traces back to 2002. In 2002, the University of Illinois at Urbana-Champaign established a master’s program in Creative Writing. This development rekindled strong appeals for a literary journal project at the university. Prior to the Ninth Letter, the English department sponsored a well-respected literary journal called Ascent from 1940 to 1988.

How did the Ninth Letter get its name?

B. It was a reference to the University of Illinois

C. All words in the first edition had nine letters or less

B. It was a reference to the University of Illinois. While brainstorming names, a student decided to look up the definition of the letter “I” since the University had recently created its new I logo. The definition was simple: “the ninth letter of the alphabet.”

Pursuing the demands of a literary journal was no small task. Stanley relied upon connections to get submissions for the first issue in 2004, receiving submissions from Pulitzer Prize-winning fiction writer, Robert Olen Butler, and Yann Martel, known for his bestselling fiction novel Life of Pi.  With the success of the first Issue, Stanley proved that the Ninth Letter could be accepted in the literary scene. Since 2004, fourteen editions have been produced.

The process for creating the magazine is not as linear as one might speculate. Over a semester, graduate students in a literary editing class read through submissions and choose which pieces best suit the magazine. Each submission receives at least two readers, and both readers must approve the submission for it to advance to the next stage. The writings are then handed to students in Art and Design who interpret the writings through illustration.

As for the online version of the Ninth Letter, Stanley teaches a separate class that is responsible for choosing original content exclusively for the web. The web version does not have graphic designs attached to the content. 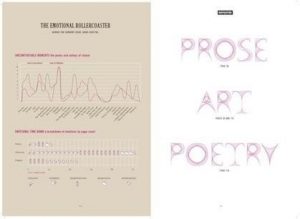 The countless hours poured into crafting the journal certainly proved worthwhile. The Ninth Letter has won numerous awards since its conception, including Best American Nonrequired Reading, Best American Poetry, The Pushcart Prize, Best American Short Stories, Year’s Best Fantasy and Horror, and Best Creative Nonfiction. Multiple awards have been given for graphic design as well, including design awards from STEP Inside Design and HOW Magazine.

On campus, one may find the Ninth Letter in progress at the Art and Design Building and the English Building.

Ultimately, The Ninth Letter is innovative in the way that it diverges from conventions of traditional journals. An element of design illuminates the writings to give a fuller story and greater meaning to the extent that the whole entity becomes an original work of art. Even the name “Ninth Letter” suggests a nod of intrigue and wit.

-Art + Design Building. Graphic Design is part of the School of Art + Design. 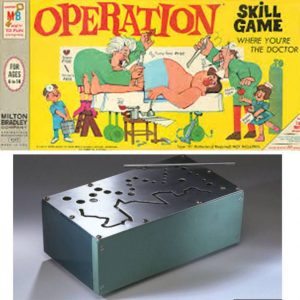