Joseph Tykochinski-Tykociner was born into a merchant family in Vloclawek, Poland on October 5, 1877. Tykociner left Europe in 1896, at the age of 18, and traveled to the United States in hopes of developing his idea of electronically recording sound on film. When he arrived in the United States he found employment in New York, at the Electric Car Lighting Company constructing lightweight batteries. He then jumped from job to job while attending night classes at Cooper Union. In 1897, he returned to Europe to continue his studies in electrical engineering at the Höheres Technisches Institut in Köthen, Germany. As a young adult he first went to work for Marconi Wireless Telegraph Company in London, which, in 1901, was the first radio company to broadcast overseas. He left the Marconi Company and went to work for Telefunken in Berlin. In 1904 he was asked by the Russian Czar to establish a radio link for the Russian naval fleets between the Baltic and Black sea. 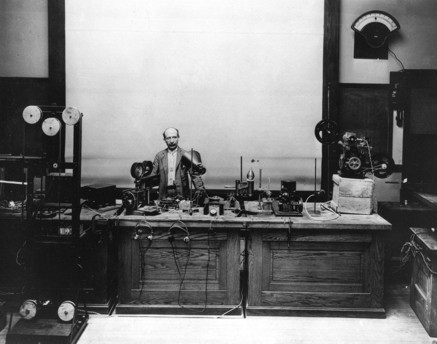 Photo of Joseph Tykociner’s public demonstration of sound on film 1922 UIUC
Tykociner returned to Poland in 1919 and was asked to work on a project to establish a telegraph link between Poland and the United States. The following year he began to work on a project for the Polish Railroad Company to aid in the development of their telegraphic communications systems. Tykociner returned to the United States in 1921 to further his career. He found employment at the University of Illinois as a research professor in the Electrical Engineering Department. While employed at Illinois, Tykociner returned to working on his lifelong dream of electronically recording sound on film. By 1922 he had successfully created the first electronic sound on film which he called a “talkie.” However, due to Illinois politics over who would control the patents on Tykociner’s invention, his dream of commercializing sound on film was never brought to fruition. Skeptics in the movie industry at the time also felt that humans were physiologically incapable of handling two illusions at once. In 1926 Lee de Forest gave a demonstration of sound on film to Warner Brothers. Tykociner continued his employment at Illinois until 1946, researching Photoelectricity, Piezoelectricity, and Zetetics.

– Materials Science and Engineering Building. Formerly the Physics Building, this is where Tykociner held a public demonstration of sound on film. 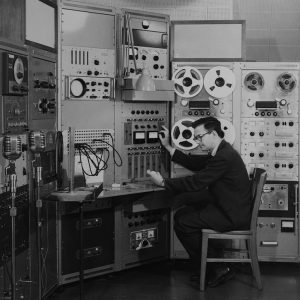