ILLIAC I was the first computer built and owned entirely by a U.S. educational institution. Based on John von Neumann’s architecture, which was developed at the Institute for Advanced Study at Princeton University, but never built, it used 2,800 vacuum tubes, and measured ten feet high, two feet wide, and eight and a half feet tall. It weighed five tons. It would stay in service for ten years, providing reliable computing power for the entire university. It was used in the design of other research instruments such as high-energy particle accelerators and the Illinois’s radio telescope. ILLIAC I was retired in 1962, when the ILLIAC II became operational.

Computing at the University of Illinois began in 1949, when the research board under Graduate College Dean Louis Ridenour sent a proposal to University President George Stoddard recommending that the university construct a copy of the von Neumann machine. A contract was given to Illinois by the Ballistic Research Laboratory at Aberdeen Proving Ground in Maryland that called for a machine to be built called the ORDVAC. Ralph Meager was chosen as chief engineer, and work was undertaken in 1950 and 1951. Part of the deal with the Army was that two of every part required for ORDVAC had been purchased or built; by November 1952, it was possible to construct a duplicate computer called ILLIAC. Hence, the University of Illinois could rightfully claim the distinction of being the first mass producer of computers (two in one year). Both computers proved to be successful. Part of the major success was the reliability that was engineered into the machines by Ralph Meagher and his development team. It was a collaborative effort that included graduate students, like Joseph Wier who solved the problem of signals going to the wrong spot and causing errors, David Wheeler, a mathematics professor who developed a way for the machine to conduct preventive maintenance, and John P. Nash, who worked on making ILLIAC a sustainable computer along with many others. ILLIAC I was used campus wide, and its success spread the computer philosophy to other campuses. 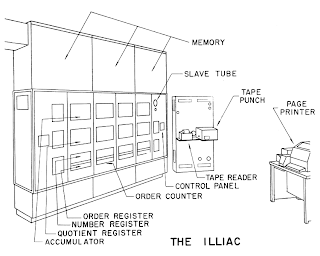 ILLIAC I was used by Lajaren Hiller, director of the Experimental Music Studio, to compose and play the Illiac Suite, the first computer-composed composition. In 1966, at the Fall Joint Computer Conference, Heinz Von Foerster organized a highly creative session on computers in music. The papers presented in this pioneering session were later published in the book Music by Computers, edited by Von Foerster and James Beauchamp.

– Spurlock Museum. Memory Core of ILLIAC I. Directions: Enter the Europe exhibit on the 2nd floor, turn right upon entering and find the display case about communications.

– Siebel Center. ILLIAC Series of Supercomputers display located in the central hallway of the first floor 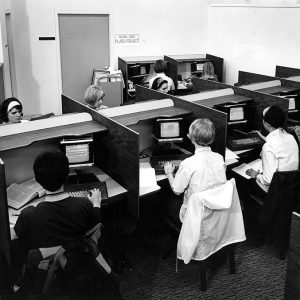