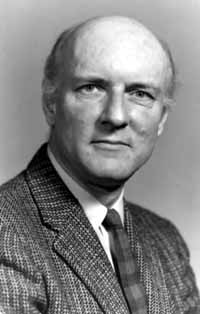 A truly unique Illinois professor for nearly 30 years, Heinz von Foerster (1911 to 2002) made his mark in cybernetics — a field which brings engineering, social and natural sciences, and the arts and humanities to bear on the understanding of control and communication in animals and machines. Cybernetics flourished from World War II through the 1960s, and while it has not survived as a unified, established academic field, it has helped spawn new fields including cognitive science, computer science, complex systems, neural networks, bionics, robotics, and artificial intelligence—not to mention lots of great science fiction.

From Vienna to Urbana, Vacuum Tubes to Cybernetics

Von Foerster’s academic focus during college in his native Vienna, Austria, was in mathematics, logic, and physics. By 1938, he was turning his attention to the biological and psychological subjects that would occupy him at Illinois, but his interests were thwarted by the Nazi invasion of Austria. Von Foerster, wife Mai, and their growing family spent the war years in Berlin and in Silesia (now part of Poland), where von Foerster earned his physics PhD in 1944 at the University of Breslau (now Wroclaw).

The family returned to Vienna after the war, but opportunities were few. Friends in the U.S. invited Von Foerster to visit in 1949, and upon arriving in New York he informally circulated a paper exploring possible molecular bases for human memory. That February, he flew to Chicago to present his ideas at the University of Illinois medical school in Chicago, where he first met Warren McCulloch, a prominent neuropsychiatrist and cybernetics pioneer. In 1949, McCulloch helped to get von Foerster a position in Urbana as head of the Electron Tube Laboratory in the Department of Electrical Engineering (now Electrical and Computer Engineering).

While von Foerster had developed expertise in vacuum tubes during his wartime research, the most exciting activity in physical electronics was moving away from tubes and into semiconductors and electro-optics. Meanwhile, von Foerster’s own interest turned increasingly toward cybernetics. McCulloch invited von Foerster into an ongoing series of conferences on the East Coast, sponsored by the Josiah Macy Foundation, at which cybernetics and related subjects were being explored by the likes of John von Neumann, Claude Shannon, Norbert Wiener, and Margaret Mead. Von Foerster became editor of the Macy conference proceedings.

By 1958, the Tube Lab was no more, and von Foerster had secured Air Force funding to establish the Biological Computer Laboratory (BCL) at Illinois, where he essentially continued the Macy conferences until 1976. 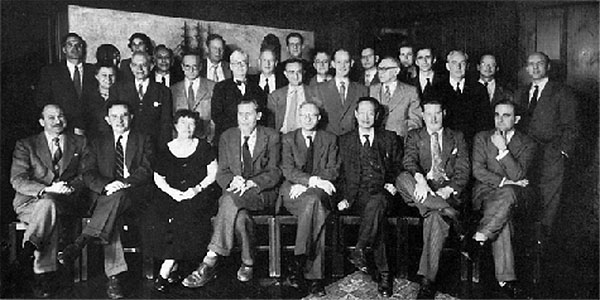 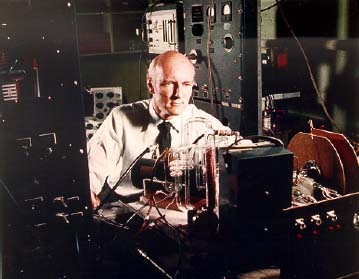 Heinz von Foerster at work in the Biological Computer Laboratory, 1960.

After retiring from Illinois in 1976, Von Foerster moved to California and remained active as a speaker, writer, and mentor until his death. He returned to Urbana-Champaign for conferences and for residencies with students at Allen Hall. Researchers working all over the world in a wide array of fields recognize a debt to cybernetics and credit von Foerster as one of the movement’s visionary catalysts.

Austrian documentarians Nikola Bock and Jutta Shubert in 1996 made a film about Heinz von Foerster, which is now available in four parts on YouTube. Alas, no subtitles, but it’s still fun and interesting to watch.

Friends and associates remember Heinz and Mai as humanitarians of the first order. After their oldest son was killed in a motorcycle accident while working for the Peace Corps in Nigeria, they dealt with their loss by sponsoring a Nigerian exchange student at Illinois. Von Foerster used his connections to help Chilean colleagues get positions outside Chile after dictator Augusto Pinochet seized power in a violent military coup. And “starving students” working in BCL often filled their bellies with delicious food at the von Foersters’ home on Flora Court in Champaign. 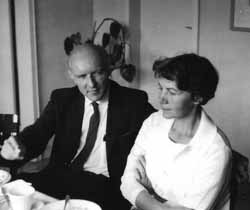 – Bardeen Quad. Von Foerster established BCL. BCL was one of several labs housed in the Electrical Engineering Research Laboratory (EERL), a building that straddled Boneyard Creek where the Bardeen Quadrangle is now. EERL was demolished in the early 1990s.

Műller, A. (2005). A Brief History of the BCL. Retrieved from http://bcl.ece.illinois.edu/mueller/index.htm

Von Foerster, H., with Műller, A., and Műller, K., eds. (2014). The Beginning of Heaven and Earth Has No Name: Seven Days with Second Order Cybernetics. New York: Fordham University Press. 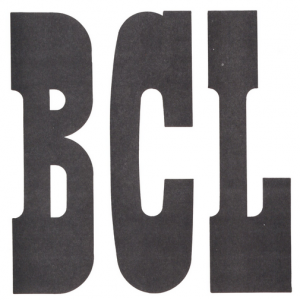