In 1946, Louis N. Ridenour was named the new dean of the Graduate College of the University of Illinois. Ridenour had previously worked at the MIT Radiation Laboratory, where he befriended Wheeler Loomis, who, by 1946 was the head of the physics department at Illinois, and one of the main reasons that Ridenour was attracted to the University.

Ridenour’s technical background and strong desire for Illinois to remain at the forefront of science led him to assemble an advisory committee of interested faculty to investigate acquiring a state-of-the-art digital computer (ILLIAC) for the University of Illinois soon after being hired as dean.

While dean, Ridenour helped establish different laboratories including the Control Systems Laboratory, the Digital Computer Laboratory, and the Radio Carbon Laboratory as well as different groups such as the microbiology group and solid state group.

– Henry Administration Building. This is where Ridenour’s office was located when he was dean of the Graduate College. 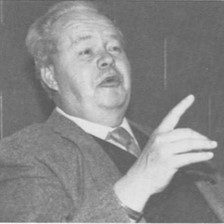