Lejaren Arthur Hiller Jr. was a chemist with the heart of a musician. While it may be unusual for most people to pursue such a divergent set of interests, Hiller passionately followed both. It was his interest in chemistry that led him to the University of Illinois at Urbana-Champaign where he pioneered a unique type of music composition.

Lejaren Hiller was born in 1924 in New York City. As a child he learned to play piano, oboe, clarinet, and saxophone. Throughout his childhood, he had an interest in both music and science. His interest in science led him to pursue his B.A., M.A., and Ph.D. in chemistry from Princeton. While he was at Princeton, Hiller also studied music composition from Roger Sessions and Milton Babbitt, both Pulitzer Prize winners for their compositions.

After he completed his Ph.D. in 1947, Hiller spent five years as a research chemist for DuPont in Waynesboro, Virginia. During his time there, he developed the first reliable method for dyeing Orlon, acrylic fibers that were created and trademarked by DuPont. On the music side of things, Hiller continued to write music and ran a small concert series.

In 1952 Hiller became a faculty member in the chemistry department at the University of Illinois. Hiller obtained a Master of Music (M.M.) degree in composition while teaching chemistry. During this time, his work on the ILLIAC IV, an early large-scale computer, gave him the opportunity to recognize parallels between composing music and computer applications. Hiller transferred to the music faculty in 1958 to start the Experimental Music Studio (EMS) after obtaining his M.M. degree.

EMS is a center for computer music, which applies computer technology to music composition. This process enables composers to create new music or allow computers to independently create music using algorithms. In 1957 Hiller collaborated with Leonard Issacson, another chemist and composer, to create Illiac Suite, the first piece to use a computer for its composition. The piece is a string quartet with four movements, each representing a composition experiment.

Hiller went on to create the programming language MUSICOMP along with Robert Baker to create the piece Computer Cantata in 1963. He directed EMS until 1968, when he moved to the University of Buffalo as a Professor of Composition. There he established the school’s first computer music facility. He retired in 1989 and passed away due to Alzheimer’s in 1994.

– Music Building: There is a historical marker for computer music located on the north side of the building.

– Corner of Mathews and Nevada St. This is where the Experiment Music Studio originally was located. The house that it was held in was torn down in 2018

– Sousa Archives and Center for American Music. Documents and objects related to Hiller can be found here. 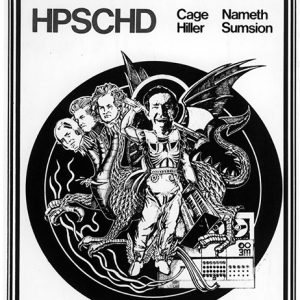