Bruce Parello enrolled in the University of Illinois as a sophomore in 1973. He skipped freshman year by taking advantage of College Level Examination Program (CLEP) Tests. He graduated in two and a half years in December 1975. Although his time at Illinois was short, his impact rivals that of any four-year student past or present.

Parello majored in mathematics and computer science, but he considered his work in the Computer-Based Education Research Lab to be the fulfillment of a hobby. He was able to act as a TUTOR programmer on PLATO – an education based system that ran on the ILLIAC thanks to three major developments.

First, in 1952, the ILLIAC was invented on Illinois’s Champaign – Urbana campus to be the first university owned and developed automatic computer.

Second, PLATO – an educational system modeled after B.F. Skinner’s Teaching Machine and ideas of self-pacing and immediate feedback – was invented by Don Blitzer in 1960.

Third, a PLATO lesson called Creek, programmed by Illinois graduate students Stuart Umpleby and Valerie Lamont, pushed PLATO’s programming possibilities past what Blitzer might have considered its traditional educational purposes. Creek was a program that sought to inform non-technical community members on how to improve Boneyard Creek. Creek expanded the possibilities for programming PLATO lessons and inspired interest in developing an early “online community.”

Parello was a quiet student known for his quirks. He could always be found wearing the same red sweater, which led to his screen name being Red Sweater, and drinking the same Orange Fanta around the CERL lab. As shy as he was, he still made two major contributions to University of Illinois History and what Brian Dear might call “Cyberculture History.”

His News Report is thought to be the first online newspaper/blog of its kind. He and a cast of writers managed to use PLATO to gain a readership of 400 community members per day, by sometimes breaking stories before the Daily Illini and focusing on the most bizarre and irreverent stories of the day. In terms of network share, that equates to about 300 million visitors to a given website today (Dear 2017).

The other innovation that Parello is credited with, perhaps more famously so to PLATO users, is the popularization of emoticons and animations on the PLATO network. PLATO offered a unique opportunity for experimenting with emoticons and character animations similar to the ones widely used today, and Parello’s use of them in his popular articles gave them a platform.

Bruce Parello’s story in the history of PLATO speaks to the height of the potential merits of the combination of efforts between university and student. Unfortunately, due to storage constraints, News Report routinely deleted old articles and there is no record left beyond the few articles that were  printed. By exploring his hobbies and getting involved on campus, Parello became a leading innovator in the Dawn of Cyberculture, while getting the training he needed for a professional career. 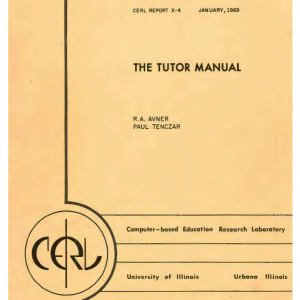