Picture a diverse group of organisms that can inhabit extreme habitats such as hot springs and salt lakes, and are also present in soil, oceans, marshes, and in the human body. Today some members are used for several industrial processes: biogas production, sewage treatment, and enzyme production. However, this unique group remained in the shadows till the 20th century, when Carl Woese discovered them.

Before Woese’s work, living creatures were divided into two categories – those that did not have a nucleus (prokaryotes) and those that did (eukaryotes). Bacteria were the sole members of the prokaryotic realm, whereas eukaryotes included everything else from plants to humans. This understanding changed when Woese unearthed the third category of life – the Archaea.

Woese was a biologist who looked at bacteria through the eyes of a chemist. In order to understand the relationship between prokaryotes it was imperative to choose a molecular marker that could be traced. The nature of the marker would need to be similar in organisms that were closely related and dissimilar in those that were distantly related. Woese chose ribosomal RNA. These molecules are the engineers of the cell and are responsible for reading instructions to generate proteins, the building blocks of the cell.

In 1964, Woese began his quest to trace the sequence of this molecule in prokaryotes. The efforts were laborious and required hours of studying the images of these molecules with the help of a light box. He along with George E. Fox, a research associate at the university, spent years sequencing different organisms. Finally, in 1976 Woese saw a sequence from a prokaryote, a weird methane-producer, that was different from other bacteria.

Methanogens were the first Archaea organism to be discovered. Woese’s colleague at the University of Illinois, Ralph Wolfe, had discovered how to grow these organisms in a lab, a very difficult task because of the extreme environment they lived in. Wolfe knew Woese was looking for different organisms to sequence so he offered some methanogens to Woese. After Woese sequenced it, he noticed it did not match what a prokaryote should look like and thus discovered Archaea (pronounced ar-KEE-uh).

The ground-breaking results were published in 1977 and is still considered one of the most influential papers in biology. Unfortunately, Woese met significant resistance from many biologists at first. Some did not take his findings seriously since it was first published in a newspaper and not in a scientific journal until a month later. Others felt that he was not a true biologist since his degree was in biophysics. To make matters worse, Woese lacked the skills of a good communicator. However, in time his findings were accepted and have now found their way to high school textbooks.

For a great resource on Carl Woese and Archaea check out David Quamenn’s new book, The Tangled Tree: A Radical New History of Life. 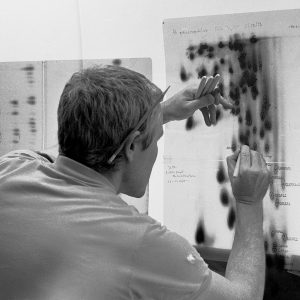