Ecology, the study of lifeforms and the ways they interacted with each other, and the environment was a discipline born in part by Stephen Forbes. One place where Forbes conducted his research would be bodies of water such as the Illinois River. Here, while surveying the marketability of certain fish species in 1911, Forbes would analyze saprolegniaceous fungi’s impact on its environment, where it lived on rotting organic matter and fed upon fish eggs that contacted it.

His work was not limited to aquatic life, but he also into studied how amphibians, birds, and reptiles influenced their respective environments. This would culminate with his work “The Lake as a Microcosm”, where he expounded in depth how organisms impacted each other, creating an ecosystem that functioned with all parts working in synergy. Additionally, by studying the migration patterns and ecological impact of Illinois Birds and analyzing the habits of lake originating creatures, Forbes become a founding father of Ecology.

“Professor Forbes was undoubtedly the pioneer in securing the introduction of the study of the natural sciences into the educational system of Illinois.” – President David Kinley

From raising strawberries to being a leader in natural sciences at the University of Illinois, Stephen Alfred Forbes was an intellect in numerous fields of study, his main focus being that of the natural sciences. Forbes was born in Stephenson County, Illinois on May 29, 1844 and went to public school until the age of 14. After public school, he studied at home with his older brother, Henry, instructing him.

When Forbes was ten, his father died of pneumonia and because his mother was in poor health, Henry took care of the family’s needs. Henry recognized Forbes’ intellect and sent him to Beloit Academy in 1860. At age 17, Forbes was enlisted into the U.S. Army and served from 1861-1865. After the Army, he tried several different programs of study and jobs (which can be seen in the timeline below).

Stephen A. Forbes was captured in war and held prisoner?

Answer
True! While he was in Corinth, Mississippi he was captured and spent 4 months in prison. However, he did not let this discourage him from studying and during this time learned Greek and Spanish!

In the year 1871 Forbes studied at Illinois State Normal University. Forbes had a passion for educating others and in the years 1875-1878 became an instructor in zoology there. He would hold several positions related to the State’s Natural History Museum and Laboratory while here. (See the timeline below.)

“As an educator and member of a university faculty he believed in keeping the door of opportunity open to all. A way to climb to a higher education, he once said, should be open to every boy and girl by some route – whether a knotted rope, a ladder or a broad highway” -President David Kinley

The next chapters of Stephen A. Forbes’ life involved the University of Illinois. Forbes was a professor of zoology (1884-1909) and entomology (1884-1921). He retained the position of Dean of the College of Science from 1888-1905. In 1905, Forbes received his LL.D. degree at the university and years later in 1921 Forbes was named professor emeritus.

“The rivers, lakes, prairies, and farms of Illinois, his home state, offered the natural settings for his ecological concepts, while the University of Illinois provided the institutional base for his activities as scientist and public servant” (Hoddeson, 2004, pg. 55).

Forbes was well-known for his publications and in 1886 received the first-class medal of the Société d’Acclimatation de France for scientific publications. Forbes’ research and writings were about insects, birds, fish, and crustaceans and their relations to the environment.

A majority of his research focused on the diets and ecological relationship between species and how these species and their interactions impacted farmers in the agricultural industry. Forbes was one of the earliest researchers to examine the relationship between organisms and their environments, and “by the end of his career, Forbes had come to define his ‘working knowledge’ of nature as ‘ecology’” (Scheider, 2000, pg. 700). Forbes published research examining ecological relations which credited him as being a founder of ecology.

One of his most famous writings was “The Lake as a Microcosm” which focused on the communal relationships between organisms within a lake. Forbes called a lake “a little world within itself – a microcosm within which all the elemental forces are at work and the play of life goes on in full” (Burkhardt Jr & Schneider, 2004, pg. 61) making lakes a suitable environment to study the relationships between organisms.

This research led to him playing a role in the Thompson Lake debate, where other scientists, local fishermen, and Forbes wanted to keep the lake as it was, but ultimately the Illinois Supreme Court ruled to have it drained for agricultural purposes.

Forbes was known for his exceptional driving skills.

Answer
False! He was locally known for mishaps while driving and his son suggests this may have been because of physical capabilities in old age, but also because it “was his father’s disposition to concentrate his entire attention on whatever he was thinking about at the time, which often was not the road in front of him” (Burkhardt Jr & Schneider, 2004, pg. 67).

Many of Forbes’ accomplishments began and continued on after his time at the University of Illinois. During the years 1917-1930 he was Chief of the Natural History Survey Division and throughout his lifetime acquired the presidential position of many organizations including the American Association of Economic Entomologists, National Society of Horticultural Inspectors, Illinois Academy of Science, Entomological Society of America, and the Ecological Society of America.

Stephen A. Forbes died in Urbana, Illinois on March 13, 1930 but his contributions to the scientific community and the impacts he made at the University of Illinois will live on. 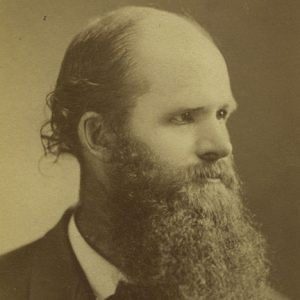 Archaea – A New Branch in the Evolution Tree