Nick Holonyak, Jr. was born on November 3rd, 1928. His parents were Russian immigrants who settled in the small, southern Illinois town of Ziegler. Holonyak was the first member of his family to receive formal schooling. Before making schooling his primary trade, Holonyak found he was not suited for hard labor after once working 30 straight hours on the Illinois Central Railroad. According to an interview in Knight Ridder, “The cheap and reliable semiconductor lasers critical to DVD players, bar code readers and scores of other devices owe their existence in some small way to the demanding workload thrust upon Downstate railroad crews decades ago” (2003). 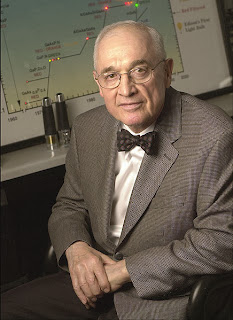 After completing a B.S. at the University of Illinois, he went on to receive a Master’s and Ph.D. in electrical engineering from the same program. During this time, he became John Bardeen’s first graduate student. While under Bardeen, Holonyak worked on quantum wells and quantum well lasers.

During the 1950s, Holonyak worked on the tunnel diode – a project that did not go anywhere itself but led to a greater knowledge on making gallium arsenides. According to Robert Hall, a fellow researcher on the tunnel diode, this knowledge was directly applicable during the laser program.

In 1960, he created the first visible semiconductor lasers, which are used today to in CD and DVD players, laser printers, copiers, and other high-tech gadgets. In an article for BusinessWeek, Holonyak said on his red-emitting laser: “I wanted visible light, because I knew that if I could get red light, other colors would be possible” (2005).

After graduating, Holonyak became a part of GE, and it was here that he developed his first Light Emitting Diode (LED) in 1962. The only color of light was red, but it would soon spark others that covered the full spectrum of the rainbow. This LED was the result of a competition among the top industrial research labs to create the very first semiconductor laser. This discovery has led many scientists to quip that this is a perfect example of how research really works: research in one topic leads to a breakthrough in another. One year after developing the first LED, Holonyak came back to his alma mater as a professor.

Beginning in the 1970s, Holonyak also released a series of discoveries related to infrared light. These discoveries led to the diodes that transmit pulses of infrared light over the world’s fiber-optic telecommunications networks.

Holonyak also developed the infrared Light Emitting Transistor (LET) with colleague Milton Feng. The device’s predicted implications include changing the worlds of telecom and computers by integrating optical and electrical functions on one chip. Holonyak has won many awards both in the US and internationally, including the National Medal of Science (1990) and National Medal of Technology (2003). Holonyak retired from teaching at Illinois in 2013, and lives in Ziegler, IL with wife Katherine, whom he has been married to for over fifty years.

– Micro and Nanotechnology Laboratory. This is where his office is located and where the idea for Light Emitting Transistor was developed.

– Bardeen Quad. Historical Marker located on the west end of the Bardeen Quad, near Engineering Hall and north of the creek. 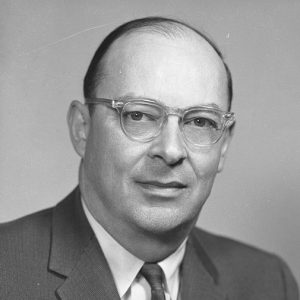