John Dyson was an electrical engineer who received his doctorate here at the University of Illinois in 1957. Upon receiving his doctorate, Dr. Dyson worked with two other researchers at Illinois and invented the first-ever radio telescope to have log-spiraled antennas mounted onto the antenna’s focus in 1961. This invention allowed us to receive efficient signals from the stars. Dyson was a groundbreaking inventor that created several of the first frequency-independent antennas in the world during his time at the University of Illinois.

John Dyson was born on August 9, 1918 in Lemmon, South Dakota to Clarence Austin and Flora Wittman Dyson. He earned his bachelor’s degree in economics in 1940 and electrical engineering in 1949 from South Dakota State University. He would go on to obtain his doctorate in electrical engineering at the University of Illinois in 1957. He worked with Professor Victor Rumsey on his Ph.D. research on the subject of the frequency independent planar spiral antenna. Upon completing his doctoral degree he was appointed to a position researching electromagnetics and antennas at Illinois.

The University of Illinois to began research into antennas in 1948 due to a military need for better-designed antennas. The initial project for the electrical engineering team was to create an antenna for high-speed aircrafts.

Throughout their research into figuring out how to design the best antenna possible there were several failed attempts. One of these failed attempts was the design of the conical spiral antenna.  The problem with this specific conical design was that its signals were unidirectional and radiated most of its signaling energy in an unexpected angle off the tip of the cone.

After a few years of intense research, the lab successfully invented the log-periodic antenna. This antenna is very broadband and has a circularly polarized receiving pattern. This design was super important to the radio telescope. The log-periodic antenna enabled it to aim the receiving beams of the telescope. These antennas had been successfully designed to receive bandwidth ratios of 40 to 1 or higher. The whole development of this antenna went from being impossible to widespread use within 10 years.

While it was originally designed to help the military, the antennas soon became the most popular on the market for television signaling. These log-periodic antennas allowed for the reception of television signals in areas where it had been challenging to get any TV signal at all. 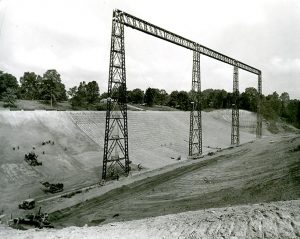 Here is an image of the 600-foot long radio telescope that was created by John Dyson and the other Electrical Engineering Research staff that was designed to receive signals from space. An array of log-spiral antennas that were invented by the University of Illinois team were placed at the reflector’s focus.

“Toward an Understanding of the Universe” (1962, Nov.). Illinois Alumni News. Record Series 26/4/1 on Swenson. University of Illinois Archives. (Image 1) 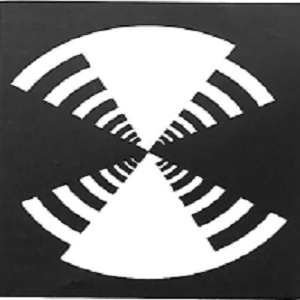