George Swenson was born in Minneapolis, Minnesota in 1922. He attended Stanford University and obtained his B.S. in electrical engineering from the Michigan College of Mining and Technology, his M.S. from M.I.T in 1948, and Ph.D. from the University of Wisconsin in 1951. Upon completion of his Ph.D., he took a position as an associate professor in electrical engineering at Washington University, then at University of Alaska, and Michigan State. In the early stages of his career he was interested in acoustics, electromagnetic theory, and analog computation.

In 1956, having developed an interest in radio astronomy and geophysics he was appointed to a joint position in Astronomy and Electrical Engineering at the University of Illinois. His chief objective was to develop a radio astronomy research program and radio telescope for the university. His work would result in the construction of the Vermilion River Observatory located near Danville, Illinois. The radio telescopes spanned 120 ft to 4000 ft built on land purchased by the university in 1959, the two telescopes cataloged interstellar data enabling scientists to analyze the molecular composition of interstellar gas.

Directions to the to the Vermillion River Observatory.

– Everitt Laboratory. This is where George Swenson’s office was located.

“Toward an Understanding of the Universe” (1962, Nov.). Illinois Alumni News. Record Series 26/4/1 on Swenson. University of Illinois Archives. (Image 1) 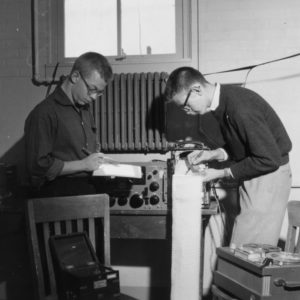