“Hopefully, I create unforgettable paintings- paintings that appeal disquietly- that give the viewer something more lasting than a momentary visual titillation-that arrest him and draw him into many levels of experience and appreciation.”- Billy Morrow Jackson (Jackson Paintings and Drawings, 1968)

Billy Morrow Jackson was an influential artist who impacted the lives of students as a professor of art at the University of Illinois from 1957-87. He was born in Kansas City, Missouri in 1926 and at the age of 18, he enlisted in the marines serving as a rifle man stationed in Okinawa during World War II. Once back from his service, his higher education began and he received a B.F.A. from Washington University in 1949.

From there, he lived in Mexico for several years where he noticed the people’s kindness in a stark contrast to the country’s crippling poverty. His experience there would heavily influence his work. Even decades later, we can see the way his style evokes these original contrasts in his self-portrait entitled Reflecting 1985-86.  The viewer is confronted with the somber overall colors of the painting while also being drawn into the lighter internal emotions in the way he captures his own image.

In 1952, Jackson went the University of Illinois graduate School of Fine Arts. After completing his degree, he joined the faculty at the university where he would remain for the next 33 years.

Jackson had a wide variety of artistic talents ranging from watercolor paintings, woodblock paintings and mural creation. He is most known for his unique style of realism, when many of his contemporaries were moving towards abstract painting. He is also known for his ability to capture the everyday activities, both indoors and outdoors, of people living in the Midwest.

Most of his paintings capture humanity by working with contradictions within the piece to create a more complex array of emotions. Jackson had a fascination with prairie life using landscape paintings to bring that world alive for the viewer. What emotions do you feel when looking at Prairie Life, 1971? Consider the use of space and colors do they make you feel an unending possibility in the land or an unending loneliness? What kind of life do you imagine within this house and is it a life you would want to live?

Jackson found great success in his art throughout his life with an endless amount of awards given for his artwork. Many of his pieces are still on display in museums.  He did not stray away from sensitive issues or controversy, in fact, he often used his artistic fame to create and circulate famous posters that were loaded with political commentary. In one such political poster, entitled Stars and Bars, Jackson uses both the title, which is the name for the original confederate flag, and the imagery of the American Flag to symbolize how African Americans are still oppressed and confined within America. He painted this piece during the Civil Rights Movement. He also had an unquestionable love of nature and humanity and a strong hatred of those who encouraged their destruction.

His evolution as an artist was closely connected to his ability to take in the world around him and capture both the good and bad. We can see this in his early works, which hearken back to his days in Mexico, and through the end of his life in his commentary on the social environment of America.  Jackson was a radical social thinker never apologizing for stating his ideas through his work making him an inspiration to many.

Krannert Art Museum – Many of his artworks were shown here during his time at the University. 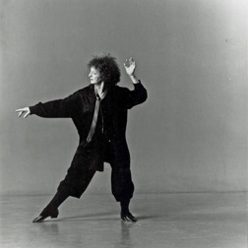