Beverly L. Greene never let anything stand in her way when it came to pursuing her dreams in architecture. An only child born on October 4th, 1915 in Chicago, IL, Greene was raised by her father, James A. Greene, who was a lawyer, and her stay at home mother, Vera Greene.

The University of Illinois was racially integrated, although not without great challenges for African Americans, by the time Greene attended college. She first made history by becoming the first African-American female to earn a bachelor of science degree in architectural engineering from University of Illinois at Urbana-Champaign in 1936. A year later she furthered her education at Illinois by earning a master’s degree in city planning and housing.

Fun Fact: Beverly Greene was involved in RSOs (registered student organizations) at UIUC just like current students are today! Can you guess which of these clubs she spent her free time in

After college, Greene started her search for a job. Greene returned to her hometown of Chicago in 1938 and broke yet another barrier by being one of the first few African Americans to work with the Chicago Housing Authority. On December 28, 1942, at just twenty seven years old, Greene achieved what she is mostly remembered for, registering with the state of Illinois and therefore, believed to be the first licensed African-American female architect in the United States.

Despite her achievements, racial prejudice made it hard for Greene to find work in the industry, and she along with other black architects were frequently ignored by the mainstream Chicago press.

In 1945, Greene packed her bags and headed for New York City to work on a housing project for Stuyvesant Town in lower Manhattan after reading a newspaper article that the project would be funded by the Metropolitan Life Insurance Company. Although the company announced that African Americans would not be allowed to live in Stuyvesant Town, Greene took a chance and applied for the project.

Greene was not only hired for the project, she was the first architect to earn the position. However, Greene still had a desire for learning and left the Stuyvesant Town assignment to accept a scholarship that allowed her to earn a master’s degree in architecture from Columbia University on June 5, 1945.

Greene never let the societal pressures of her time slow her down, and during her career she worked with a number of notable names in the architecture world. Greene collaborated with an architectural firm headed by Isadore Rosenfield that specialized primarily in healthcare and hospital design. Also, Greene was drawn back to the realm of education, helping Edward Durell Stone work on a theater at the University of Arkansas in 1951 and the arts complex at Sarah Lawrence College (1952).

Some of her work can even be seen internationally. The next time you travel to France, stop by the UNESCO United Nations headquarters in Paris that Greene helped work on with architect Marcel Breuer before it was completed in 1958. Beverly Greene’s final projects of her career were once again for higher education. She helped design buildings for New York University, but sadly she passed away at the age of 41 on August 22, 1957 before her NYU projects were completed.

Although Beverly Loraine Greene did not get to see her last project come to fruition, the legacy she built was reflected in her funeral service. It was held at the Unity Funeral Home in New York, a structure she helped design. Greene persevered and stayed true to her passions of architecture and learning, despite the racism she had to face, creating a lasting legacy in her too short career.

– Temple Hoyne Buell Hall. The current home of the School of Architecture. 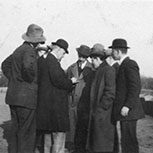